In our new double deckers, there is room for up to six bicycles in each train set. You fasten your bike with a holder in the designated place in the flexible coach. In case it is crowded on board the train, you will have to wait for the next departure if the bike is to be brought. It is always the train conductor who decides if there is room for the bike, and the assessment is made based on space and safety concerns. This means that there is never a guaranteed place for your bike. 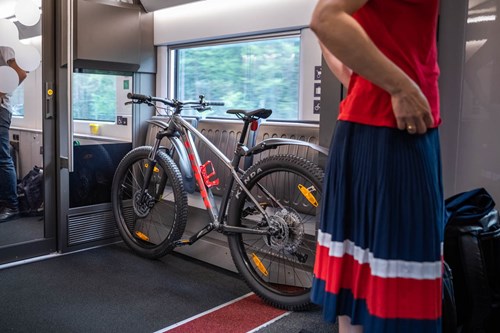 You are solely responsible for getting your bike on and off the train. Keep an eye on the bike throughout the trip so that it is not damaged or soils anyone or anything. Pay special attention when getting on and off as it can be crowded. It is you as a customer who will be liable for any contamination of a fellow traveler or damage which may occur.

Bicycle cart/trolley, tandem or goods bicycle are not allowed on board the train.

Electric scooters / electric mopeds (available as both 3- and 4-wheelers) are counted as vehicles and are not allowed to be brought on board. Our trains are not adapted for these vehicles due to, among other things, poor turning radius. The safety aspect is another reason why they are not allowed on board.

Most of our Regina trains are equipped so that a bicycle can be fastened in the same way as in our new double-deckers. If the train does not have a holder for bicycles, it is not permitted to bring bicycles for safety reasons.

Due to space and safety reasons, it is not permitted to get off or on board a bicycle at Arlanda C.

Due to the limited space and the flow of passengers which may arise as well as the need to pass the barriers with a valid ticket, bicycles at the station are considered a safety risk

How to take the bike through Stockholm C, Västerås C and Södertälje Syd

At Stockholm Central, it is not allowed to carry your bicycle through the station building. You can solve this easily by using the following indicated paths:

For arrivals and departures on tracks 1 - 10, take the path to and from the platforms via the exit at Arlanda Express entrance at Östra Järnvägsgatan/Vasaplan. All tracks can be reached without passing through the station building and here there are no level differences.

For arrivals and departures on tracks 11-19, take the lift via the Klaraberg viaduct Nils Ericson's floor and continue via the corridor that runs under the tracks between11-19. Here there are level differences where stairs and lifts are available. Follow the signs for track 19.

The bike must be led no matter where you are at the station. Feel free to take the elevator or stairs, but not the escalators. 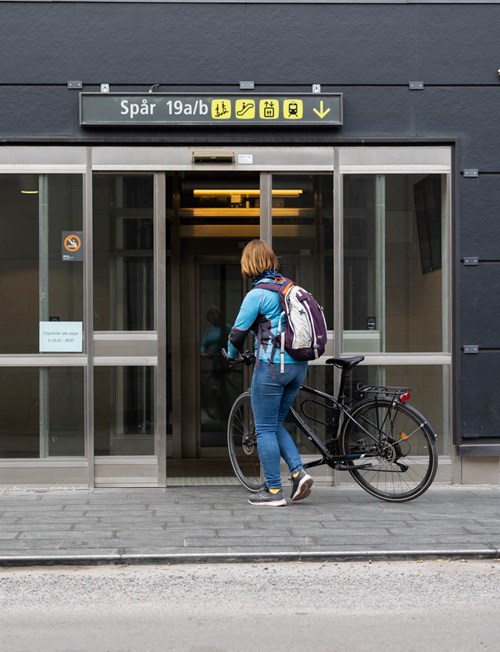 You can lead your bike to the platforms via the lift and a connecting passage which leads through the station.

There is an elevator which takes you down to the street level.

It is fun that you travel by bike, but to make it easy to take it to and from the train, there are some important things you need to keep in mind to make it as smooth as possible.

How to travel with a wheelchair and seat scooter

If you have a physical impairment and need help to and from the train or when changing trains, you can order an escort.

Read more about how to order escort

If you have lost something during you’re your trip, we will want to try to help you find it.

Read more about lost and found